It is twelve noon on September 13th, 1862 and the Army of the Potomac has finally brought the Army of Northern Virginia to ruin. After 67 turns of a nail-biting game, Lee concedes that he has been outmanoeuvred and beaten.


The VP chart tells the story. By riding around in the Union rear (pretty much unopposed I have to say!) JEB Stuart gained about 80% of the objective points that were up for grabs - the Union finished with only 40 remaining out of an initial 250. But it wasn't enough. The Rebs also gave McClellan's artillery some very rough handling - but that wasn't enough either!

Here is the situation at the end of the game. D.H.Hill's division has disappeared from the map at Williamsport because it was encircled and wiped out.


So where did it all go wrong ? Well, first I will bleat on pathetically about the factors that were stacked against me !  The scenario involved historically sized armies so that McClellan had 30,000 more men than Lee, even though Rebel troops were of marginally better quality than their enemy. Secondly, at all scales of the game the mechanics don't allow for a player who is not faring well to disengage and live to fight another day. Historically a victorious force would be as exhausted and demoralised as it's opponent and the two sides would simply disengage, without the losing force being completely destroyed (we hope to find a way to address this in future).

Okay - that's the moaning done ! Playing as McClellan, my brother Ian simply came up with a brilliant strategy and pursued it doggedly until he beat me. After a bit of a clumsy initial deployment, I arrived at an excellent defensive position, making good use of terrain and artillery LOS. On the morning of day two Longstreet's men launched a surprise attack on the Union left, which I know seriously rattled him and threw a spanner in the works. So, faced with all this Ian decided not to tackle any of the Confederate main position head on at all ! He shifted his weight north west to Williamsport where he pulverized D.H.Hill for a massive VP haul. When I shifted half of Longstreet's men over to that flank to try and deal with the situation he was simply ready for them with most of his army solidly in place.

Ian's plan was already good but I generously helped him him out with two massive blunders. I simply didn't think he would attack D.H.Hill with virtually ALL of his army, so I left Hill vulnerable. And when Ian passed his army across the front of my main position in order to get to Williamsport, I just sat there paralysed in my 'good defensive position' and let him do it, when I could have attacked.

A well earned and convincing victory for the Army of the Potomac. Check out Ian's celebrations at :
http://roadtoappomattox.blogspot.co.uk/
Posted by Dry Stonewall at 05:34 No comments:

10:20 am: It has become clear that I have been seriously outmanoeuvred by McClellan - instead of attacking Lee's main position he has pinned it and bypassed it to encircle D.H.Hill at Williamsport. Although this has failed to yield a decisive VP total at the moment, it certainly will in the long term. I am pushing out Lee's left wing in reponse but it is too little, too late I think.


Jones' Division pushes hard towards the banks of the Potomac below Williamsport, but the Yankees are moving to block the manoeuvre. Behind Jones, Anderson's Division (rushed from the eastern flank) assembles at Downsville.

The strategic situation at 9:00 am. Three things to note : there is a build up of Union forces to dislodge D.H.Hill from Williamsport : McClellan is refusing the left flank of the Army of the Potomac in response to the hammering it took in Longstreet's dawn assault : and in the bizarre absence of any Yankee troopers, Stuart has made a beeline for Funkstown. 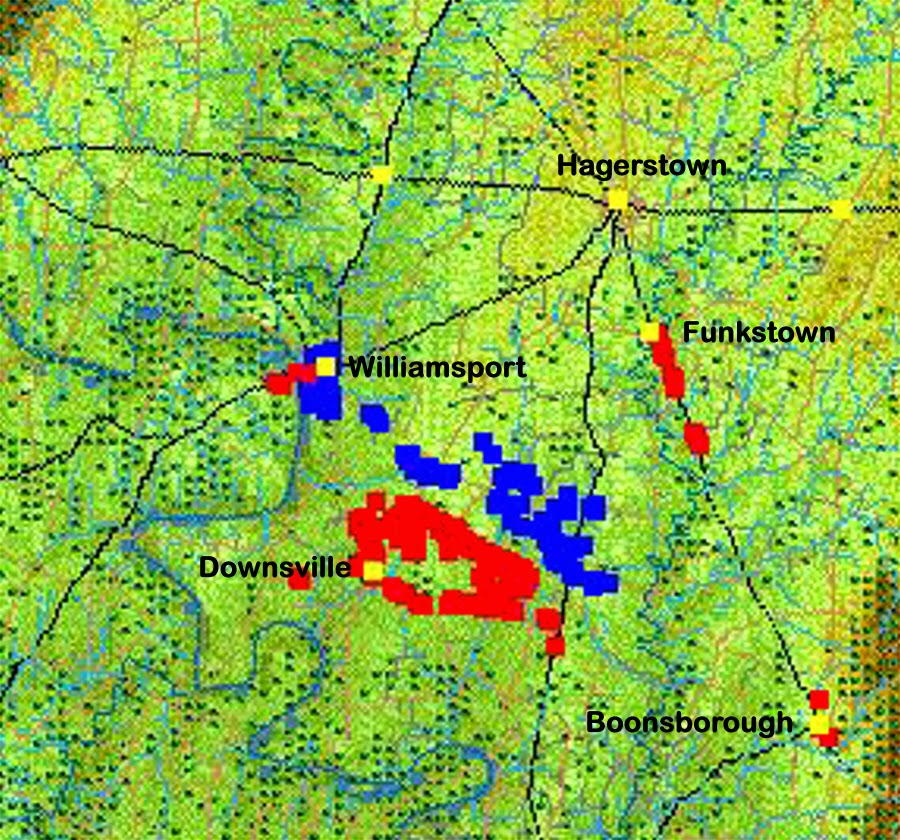 Williamsport is under immense pressure. It is unlikely that we can hold it, but we can certainly make the Yankees pay for every street and building - and of course one Reb DIVISION is tying up two Union CORPS !! In truth, my opponent is reckoning on surrounding and eliminating D.H.Hill for a massive VP reward, and I have stupidly allowed it to happen by being too cocky.

Stuart's men have been feinting and manoeuvring behind Union lines to cause maximum anxiety. I expected huge numbers of Pleasonton's troopers to show up and put a stop to it - but they never did! So now the Reb cavalry is off to Funkstown.


I don't want McClellan to have it all his own way at Williamsport so I am pushing Lee's reserve
division ( Jones/Longstreet's wing) out from Downsville on our left flank, in as threatening a manner as I can muster.


I feel that the whole weight of the engagement may be shifting west. As there is a handy east/west road from Tilghmanton through Mount Moriah to Downsville, I am rushing Anderson's division across to the other flank. This can be easily and swiftly done without disturbing the main front we are presenting to the enemy, but the downside is that Anderson's division is weakened and fatigued by the morning's combat.


Here is a tactical overview of the bulk of the Army of Northern Virginia. 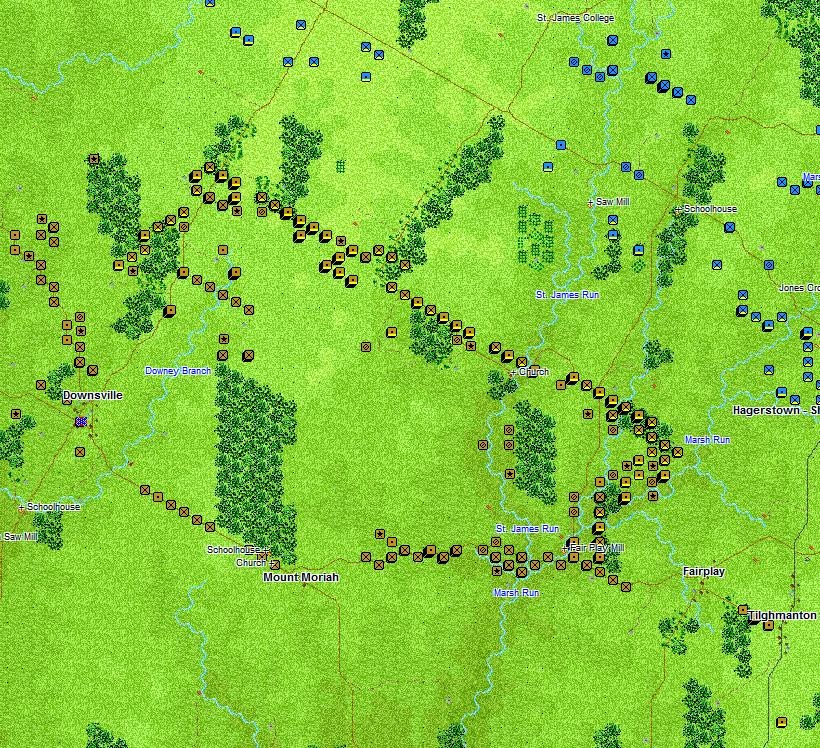 Click images to enlarge. Follow the union player at : http://roadtoappomattox.blogspot.co.uk/
Posted by Dry Stonewall at 09:50 No comments:

Overview of the strategic situation at 6:40 am.

Overview of the main tactical situation. Another disastrous round of routing has forced the Union player to disengage several divisions north and east of Tilghmanton. I am going to use the lull to start withdrawing my own forces. The original Rebel dawn attack has shaken McClellan's nerves and caused a lot of casualties but I can't achieve any more here and we probably need to cautiously extricate ourselves.

Robertson's cavalry brigade is shown here approaching the Union rear from the east of Antietam creek as Stuart attempts to add to McClellan's headaches. That's what he's paid for.

Posted by Dry Stonewall at 13:21 No comments:

The dawn attack on the extreme Union left has led to a blistering firefight with big losses on both sides. The Yankees counterattacked from the east, probing for Anderson's flank, and a handful of Reb units skedaddled - but the main line held and continued to slug it out. Eventually we were rewarded by a massive number of Union routs, but it barely impacted the effectiveness of their front line as there are always more soldiers in blue to plug the gaps.

Here are the in game statistics as of Turn 49, which is 6:00 am on Sept the 13th. I am particularly pleased to be winning the artillery combat, as the massive superiority in Union guns is usually my downfall. Confederate cavalry losses relate to much earlier in the game when Stuart was a little er,...reckless !


And speaking of Stuart, he is once again making a nuisance of himself far in the Union rear having gathered the VPs for Boonsborough (near South Mountain) during the night. 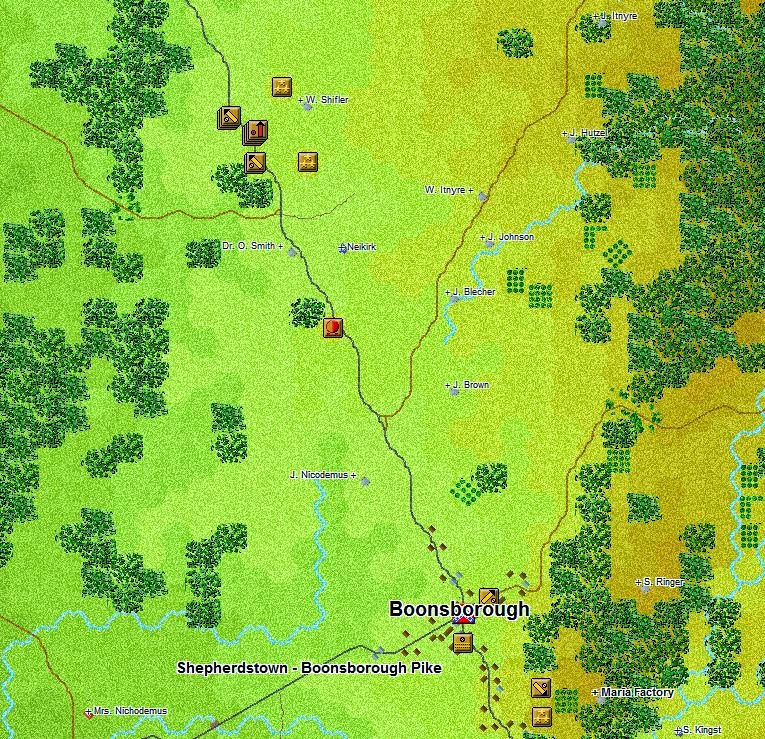 At Williamsport, D.H. Hill has gone on the defensive as McClellan orders Burnside's Corps to attack and remove the strategic threat he represents. 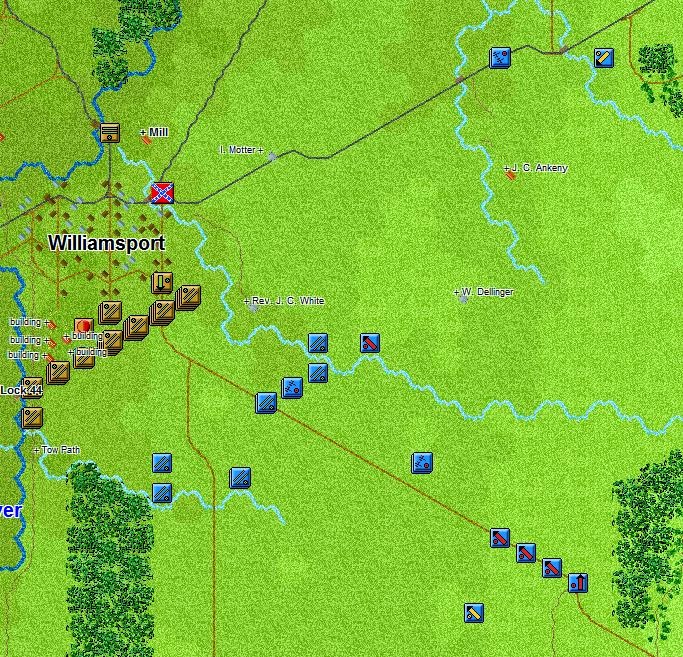 Overview of the main Confederate position with all the Union forces that are currently visible to us. 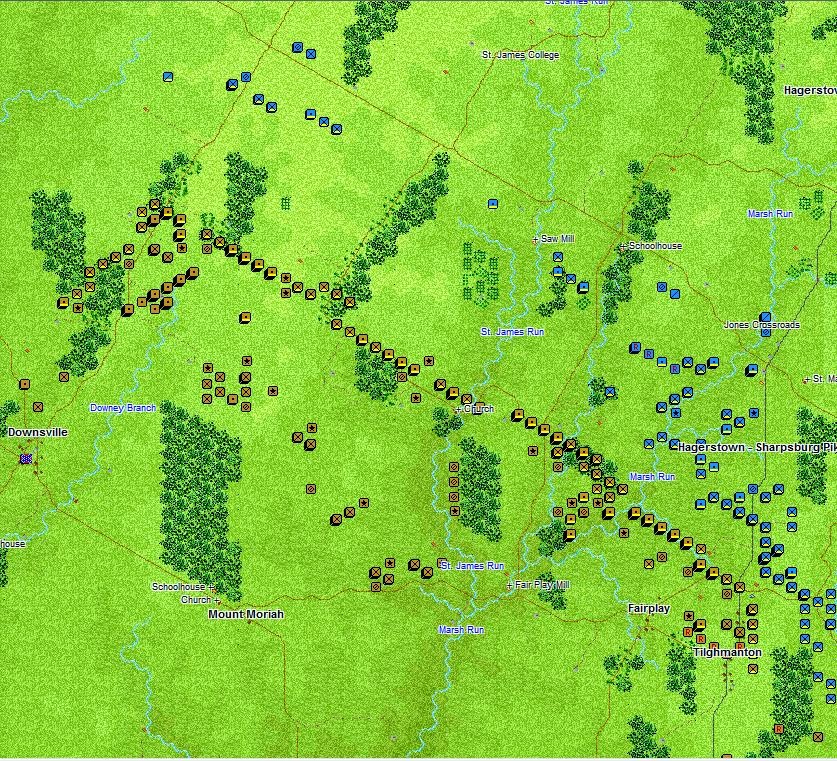 Click images to enlarge. Follow the union player at : http://roadtoappomattox.blogspot.co.uk/
Posted by Dry Stonewall at 14:14 No comments:

Here is the situation at first light (visibility just 4 hexes). We can now see what we are up against - a slightly more coherent line than we would have liked, but we have hit it hard and caused a lot of enemy casualties before they could properly react and return fire.

The Rebs have just deployed dozens of guns right up on the front line which will be able to open fire next turn - Union artillery is conspicuously absent. If this gamble is going to pay off we need to make headway very quickly and rack up a lot of VPs. Come full daylight and every Union battery within a mile is going to zero in on us.
Posted by Dry Stonewall at 14:57 No comments:

Both armies settled down at sunset yesterday, and any movement now is not visible to the enemy but it does incur high fatigue penalties. I know from bitter experience that when the Army of the Potomac is given time and space to marshal it's overwhelming resources against a static enemy it can be hard to beat.


So I need to be a bit unpredictable and keep McClellan off balance. In the early hours of the night I pushed Anderson's division and most of McLaws division back out to Tilghmanton - a position they abandoned earlier in the day. It looked to me as if the Union left flank was up in the air and I might be able to take advantage of that. I have nervously made a deployment to assault the location where the extreme enemy flank was observed to be in daylight. Two things could go horribly wrong with this plan ...........


McClellan may may shifted or refused that flank in the darkness leaving me poised to attack .... nothing ! Or he may have massively reinforced it and I will be committed to assault against unfavourable odds. But if he has just left it as it was in the afternoon then I may be in with a chance of dealing him a hammerblow and taking the initiative away from him. My instinct is that his attention (and the weight of his army) is focussed on the opposite flank, nearer Williamsport.

Click maps to enlarge. Follow the Union player at :
http://roadtoappomattox.blogspot.co.uk/
Posted by Dry Stonewall at 16:20 No comments: